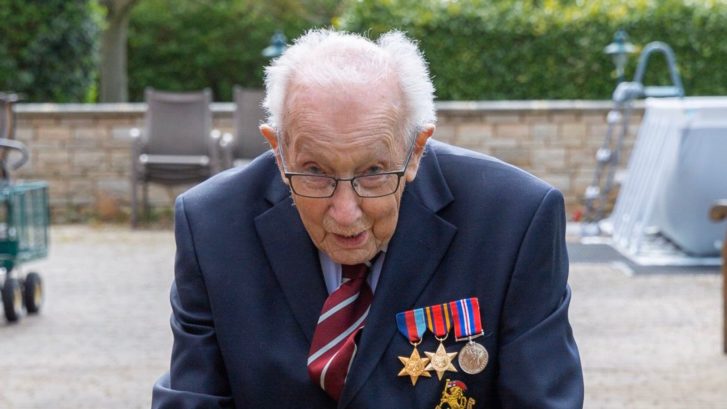 Tom Moore has described health service medics as “heroes” and now he’s raised millions for them by walking around his garden.

This 99-year-old veteran has raised more than £8m for the NHS by walking around his garden. Captain Tom Moore had originally hoped to raise £1,000 by walking 100 lengths of his 25-metre garden in Bedfordshire.

More than a quarter of million people have donated and at one point more than 90,000 were on his page at the same time. His aim was to complete it before he turns 100 on 30 April – but he is currently on track to finish by Thursday.

Comments on his fundraising page praised the 99-year-old as an “inspiration” and “a true hero to many”.

Captain Tom Moore has now raised more than £8million for the NHS – and so many people have flocked to donate money that his JustGiving page crashed.

Mr Moore said on BBC One today: “Thank you so much to all you people who subscribe to the National Health Service because, for every penny that we get, they deserve every one of it.”

Originally from Keighley in West Yorkshire, Mr Moore trained as a civil engineer before enlisting in the Army for the Second World War, rising to captain and serving in India and Burma. When he was posted to serve in India in October 1941, it took his Battalion six weeks by sea to arrive there. During his time in south Asia Captain Moore was instructed to start a motorcycling course before the Battalion was moved on to Calcutta – a road journey which took three weeks in Monsoon season. Back in the UK Captain Moore was sent on a course at The Armoured Fighting Vehicle School in Bovington. He was kept there as an instructor until they were demobilised.

Mr Moore began raising funds to thank NHS staff who treated him for a broken hip. His daughter, Hannah Ingram-Moore, told the BBC that the amount raised was “beyond our wildest expectations”.

Hannah Ingram-Moore said: “No words can express our gratitude to the British public for getting behind Tom, for making this into a heartfelt story. He’s a stoic Yorkshireman, he’s an unruffled straight-down-the-line kind of person and has embraced this adventure as the next stage of his life.  I believe that life is all about purpose, we all need purpose, and, whilst he’s had a life full of purpose, he did fall and break his hip and became much less independent than he had been for the preceding 98 years, and what you have done, the British public, and everyone who’s supported him, is giving him his next purpose. He is articulate, he’s alive, he’s doing this and I think he’ll do this until everyone says ‘Stop, don’t do it any more’.”

Broadcaster Piers Morgan has launched a campaign to get Captain Tom knighted for his service to the UK so everyone could “give him something back”.

Previously, when the amount reached £5m, the account posted: “5 MILLION! Huge thank you to @JustGiving who had over 90,000 people on Tom’s page at one time, and had to try ensure that the site didn’t crash. WOW – just speechless.”

One donor, Mike Davies, wrote: “Great Job, Captain Tom. In these times where all news seems depressing, it’s great to hear the story of a true British hero.”

To read the various updates about Captain Tom, click on the following links: